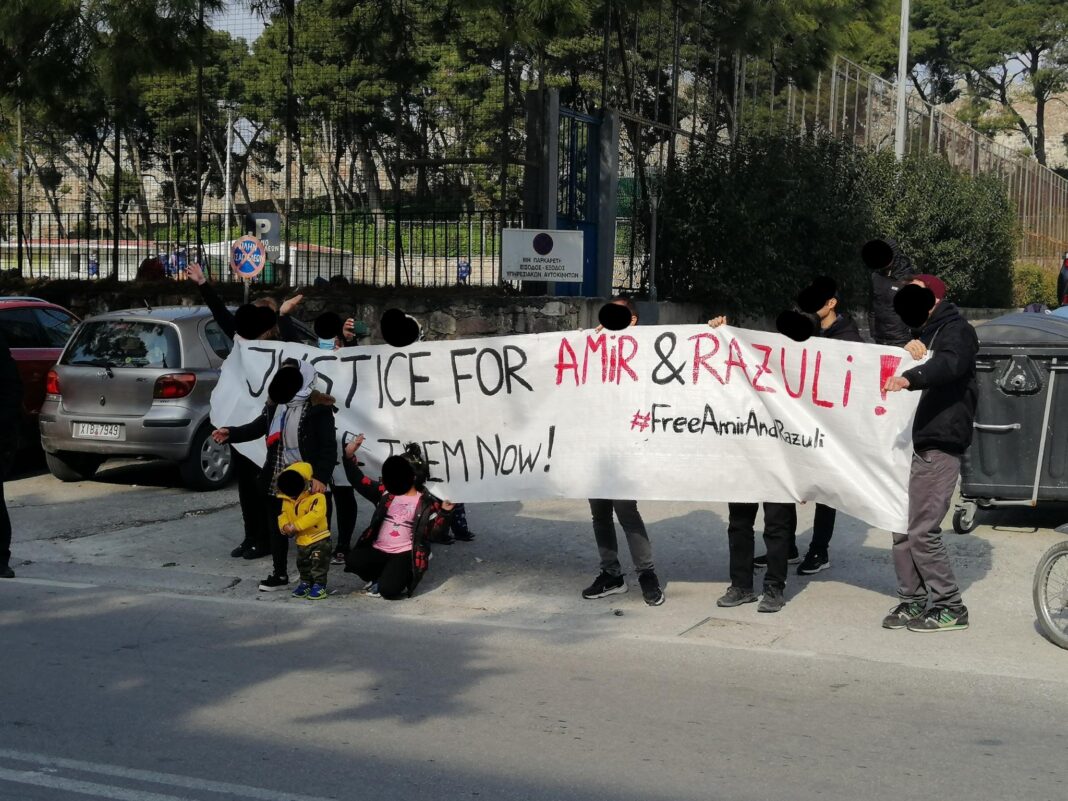 The appeal trial of the two young Afghan men convicted in first instance of “facilitating illegal entry” and “illegal entry” to Greece has been interrupted. The defendants Amir Zahiri (27) and Akif Razuli (24) were brought respectively from Chios and Serres prisons, to Mytilene on Lesvos and forced to wait for two days. In violation of the Greek criminal procedural law, they were seated  handcuffed in the court room while awaiting their own trial. They were not given any information about if or when the trial would happen, until it was finally opened today, 18 March at 2:30 pm- just to be halted immediately after. All witnesses and international trial observers who had travelled to Mytilene from different European countries and the Greek mainland were also forced to wait along with Amir and Razuli, among them Amir’s wife and their two children. Also three Members of European Parliament came to testify and observe the trial, as well as the sea rescuer Iasonas Apostolopoulos.

The trial will resume in 20 days, on 7 April 2022. Thereby, the chain of injustice that Amir and Razuli were confronted with over the last years continues: Amir and Razuli were arbitrarily arrested on 12 March 2020, kept in pre-trial detention for seven months and convicted in September 2020 to 50 years imprisonmment without any evidence against them. Now their appeal trial was interrupted.

“The last two days were very difficult, especially for the people who are in detention without any evidence for so long. For these two days nobody knew if the trial will start or not. The court decided to start the trial today and continue at 7 of April 2022, because they acknowledged the fact that the trial must start in a reasonable time. Lets all be there on 7th of April!”

“Prolonging the process is prolonging the suffering, Amir and Razuli, their relatives and friends have the right to know about their future. This trial, indeed, shows that Europe is used not to criminalize those who cause the suffering but the people who suffer.”

“Amir and Razuli should never have been arrested, let alone convicted and imprisoned, given the lack of evidence that they committed the crime they are accused of. While Amir and Razuli will never get back the two years they’ve spent in prison, we hope this miscarriage of justice is rectified at the continuance of their appeal trial next month.”

The Legal Centre Lesvos, Aegean Migrant Solidarity, borderline-europe e.V., You can’t evict Solidarity and Deportation Monitoring Aegean have closely followed the trial. We will continue to stand in solidarity with the defendants, no matter how long it will take to achieve justice for Amir and Razuli.

Share
Facebook
Twitter
Pinterest
WhatsApp
Previous articleThe results of the 3rd term of the Ankara Queer Art Program – Artist Residency have been announced.
Next articleİHD-HRFT: A World without Torture is Possible against All Odds!