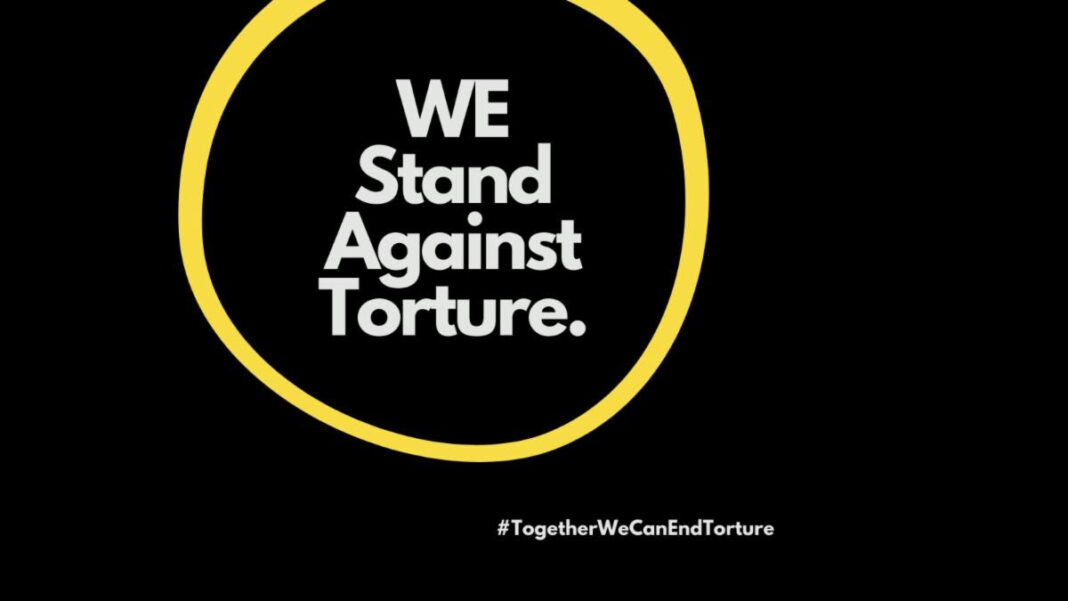 A World without Torture is Possible against All Odds!

Today is 26 June. The “International Day in Support of Victims of Torture” is a special and significant day for human rights defenders both at home and abroad.

The United Nations (UN) Convention against Torture and Other Cruel, Inhuman or Degrading Treatment or Punishment (UNCAT) was adopted on 26 June 1987. And the UN proclaimed June 26 the “International Day in Support of Victims of Torture” in 1997.

The UNCAT absolutely prohibits torture to protect the inherent dignity and value of the human person. Such an absolute prohibition, which is a common achievement of the human family and constitutes one of the most fundamental rules of modern human rights law, is jus cogens as per hierarchy of norms, in other words, it qualifies as a peremptory norm. There can, therefore, be no exceptions to this rule. Thus, Article 2 § 2 of the UNCAT prescribes: “No exceptional circumstances whatsoever, whether a state of war or a threat of war, internal political instability or any other public emergency, may be invoked as a justification of torture.”

Yet torture is still being committed in many countries in the world by states against societies as an instrument of inhuman punishment and intimidation despite such open and clear definition.

Turkey ratified the UNCAT in 1988 and prohibited torture in its Constitution and the Turkish Penal Code (TPC). Torture, however, has maintained its existence as a systematic state practice not only during periods of military coup d’états but throughout the history of the republic. Moreover, today the whole country has virtually become a site of torture because the current political power’s repressive mode of governance and control has rendered all the issues of the country, ranging from economics to public health, a security problem. The appended data reveal the fact that torture remains the most prominent human rights problem in Turkey despite its absolute prohibition and qualification as a crime against humanity. These data indicate that the statement “Zero tolerance to torture” is nothing but historical and factual discursive propaganda.

Acts of torture and ill-treatment have been maintained with all their severity and gravity in official custodial places, in proportion to the increasing authoritarianism of the political power, and have been brought about by the violation of procedural guarantees, long-term custody periods, dysfunctional monitoring and prevention mechanisms or the sheer absence of independent monitoring and prevention mechanisms and the like through such reasons as law, rule and norm control evasion; arbitrariness and willful negligence that have become quite common at various levels of the state.

Torture and other forms of ill-treatment in the streets, outdoors during the intervention of the law enforcement into peaceful assemblies and protests or at spaces like houses and offices, in other words, in non-official custodial and extra-custodial places, have also reached unprecedented levels. Such violence by the law enforcement is against the rules, not controlled, not punished, ignored and even encouraged by the political power and it goes way beyond the right to use force defined in universal law and domestic laws while becoming a part of everyday life.

Similarly, women and the LGBTI+, workers, defenders of life, members and executives of political parties, members and executives professional organizations and human rights defenders peacefully exercising their right to freedom of assembly and protest, which forms the basis of a democratic society and guaranteed by the Constitution itself, have been subjected to such inhuman and disgraceful violence by the law enforcement.

The recurrent increase in enforced disappearance/abduction cases following 2016 when the state of emergency was declared, which is one of the most disgraceful human rights violations of our recent history qualifying as a crime against humanity, is extremely alarming as well. The fate and whereabouts of Yusuf Bilge Tunç has been unknown since 6 August 2019.

Prisons have always been spaces where acts of torture and other forms of ill-treatment have been committed intensively. Especially in the period starting with Turkey’s re-entry into a climate of conflict in July 2015, followed by the suppression of the military coup attempt and the subsequent declaration of the state of emergency, there has been a significant increase in acts of torture and ill-treatment against detainees and convicts in prisons. On the other hand, when the existing structural problems, the lack of effective and independent monitoring mechanisms, as well as the restrictions and measures taken on the grounds of the COVID-19 pandemic are considered together, human rights violations in prisons have become invisible. As stated in the reports of the European Committee for the Prevention of Torture and Inhuman or Degrading Treatment or Punishment (CPT), the unacceptable isolation in İmralı Prison causes serious concerns in the society.

This alarming reality, which becomes visible with the appended data, has also been reflected in reports drawn up by international prevention mechanisms and human rights bodies. Yet, the political power unwilling to limit itself with any rule and norm, particularly by the Constitution, has not been heeding international mechanisms along with their criticism and warnings and failed to take steps to prevent torture. It, on the contrary, has been attempting to “guarantee” impunity by introducing regulations and amendments in legislation that are against the absolute nature of prohibition of torture and hoping to curb the struggle against torture by threats against human rights defenders who have been striving to render these violations visible.

It is, nevertheless, possible to stop torture because it is committed at the hands of humans despite such bleak truth.

The obligation to prevent/stop torture falls firstly on states. We, therefore, remind the political power of the following minimum demands once again that we have been patiently and persistently voicing for years as part of our duty as human rights defenders and ask them to be put in effect without delay:

We, however, would like to remind all that protecting human dignity and preventing torture is at the same time the responsibility of the whole society. To be human beings and citizens, to protect the common bond that makes us a society we must see the suffering torture brings about and we have to enhance solidarity.

İHD and HRFT, whose raison d’être is to create a country and a world without torture, will continue standing with survivors of torture under all circumstances to make their voices heard despite all cover up, intimidation and silencing attempts; continue documenting and reporting acts of torture they were subjected to, supporting their physical and psychological healing processes, assisting them in accessing justice, fighting impunity to make sure they will not suffer ever again.

Human dignity will triumph over torture…

A world without torture is possible!